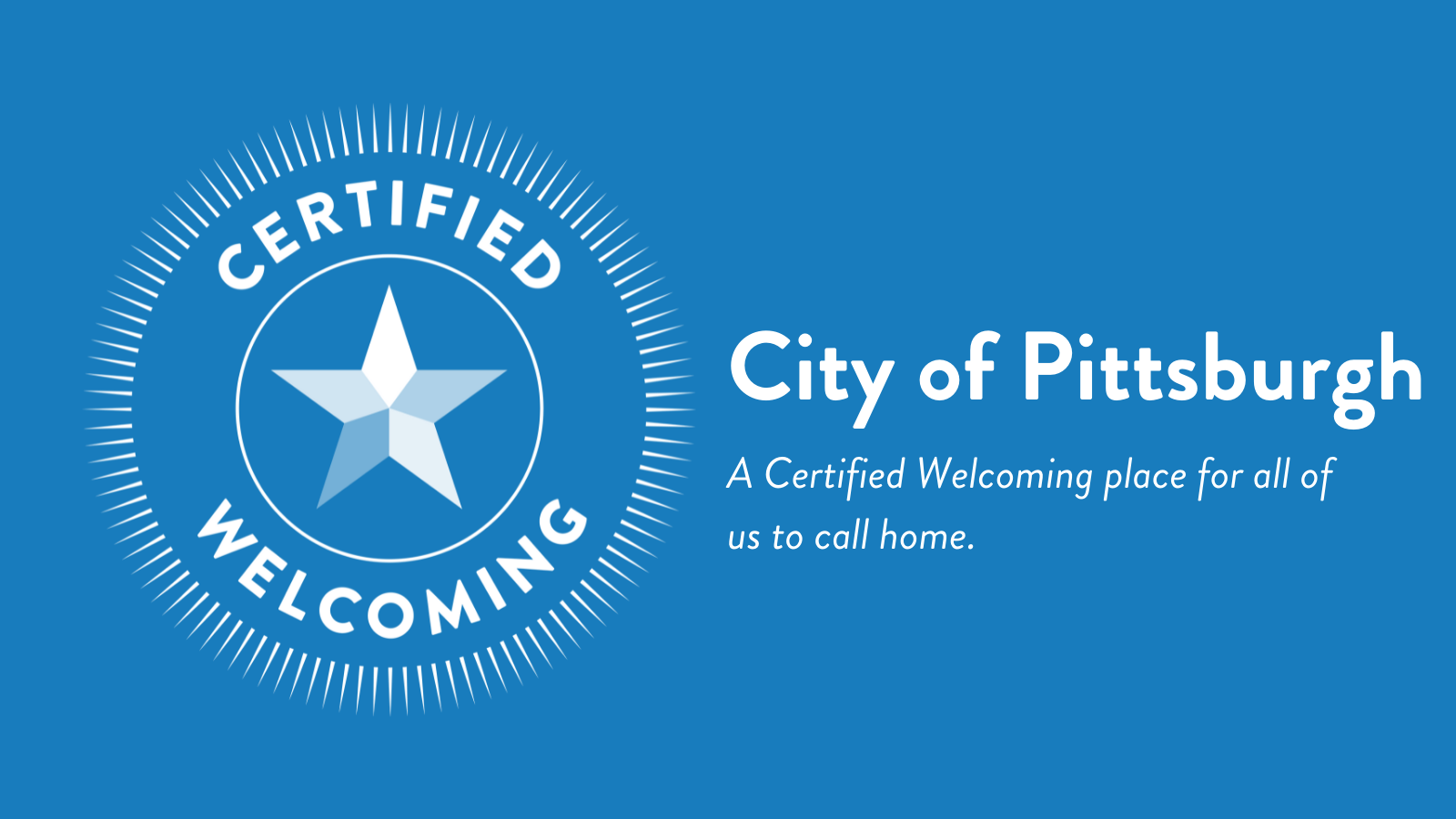 Decatur, GA — Welcoming America, a national nonprofit organization, is thrilled to designate the City of Pittsburgh as Certified Welcoming. It is the 12th place to become Certified Welcoming since the program launched in 2017, and the third in the Commonwealth of Pennsylvania, joining the cities of Lancaster and Erie.

The designation not only comes during Welcoming Week, but also at a time when Pittsburgh and many American cities are preparing to welcome refugees from Afghanistan, while continuing to wrestle with what it means to be a welcoming and inclusive city for all residents, including immigrants.

Said Rachel Perić, executive director of Welcoming America: “It’s my great pleasure to congratulate the City of Pittsburgh on achieving the status of Certified Welcoming. As Pittsburgh becomes a more diverse city, and prepares to welcome new families from Afghanistan, this public-private partnership reflects the phenomenal work of community based organizations with the public sector to reduce the barriers residents might face to full participation, civically, socially, and economically. A big thanks to Mayor Peduto for his leadership and legacy; Feyisola Alabi of Welcoming Pittsburgh; and the Welcoming Pittsburgh steering committee for their work and belief in welcoming values as a benefit for all Pittsburghers.”

To become Certified Welcoming, the City of Pittsburgh completed an extensive process that included a self-assessment, in-person audit, and audit action plan. Local policies and programs were benchmarked against the Welcoming Standard, which evaluates community investments in education, economic development, policing, and more. As part of this process, the city collaborated closely with the coalition network All for All, the Allegheny County Department of Human Services, and the Welcoming Pittsburgh steering committee.

Notable achievements that led to the city’s Certified Welcoming designation include the Department of Permits, Licenses, and Inspections joining the steering committee, which allowed for regular communication and information on code enforcement with the immigrant community. The city also implemented language access training for public-facing staff to ensure that immigrant communities in Pittsburgh receive important information in languages other than English.

Said Mayor William Peduto: “Pittsburgh has a tradition of welcoming immigrants from all around the world to contribute to the rich cultural fabric of our city. We know that today, just as it has been historically, immigrants make our city stronger because when our neighbors have equitable access to opportunities and succeed, Pittsburgh succeeds. That’s why we have strived to be a welcoming city and are grateful to be a Certified Welcoming city. I’d like to thank Welcoming America for recognizing the work of Welcoming Pittsburgh, our community partners and our residents in creating a community where our policies and programs promote action for immigrant inclusion, especially in a time where our immigrant neighbors need us the most.”

The city will announce its Certified Welcoming designation via Facebook Live on Friday, September 17 at 12 p.m. Eastern Time, with remarks by Mayor Peduto, Rachel Perić, and more.

Data on immigrants in Pittsburgh

As of 2019, immigrant residents in Pittsburgh make up nearly 4% of the population, with 76% being of prime working age (16-64). Additionally, immigrant residents are 27% more likely to be entrepreneurs and more likely to hold graduate degrees. According to New American Economy, immigrants in Pittsburgh pay $1.2 billion in taxes and hold $2.7 billion in spending power, demonstrating their sizable impact on the economy locally and beyond.

Welcoming America is a nonprofit, nonpartisan organization that leads a movement of inclusive communities becoming more prosperous by ensuring everyone belongs. We believe that all people, including immigrants, are valued contributors and vital to the success of our communities and shared future.

For the City of Pittsburgh: Molly Onufer, [email protected]