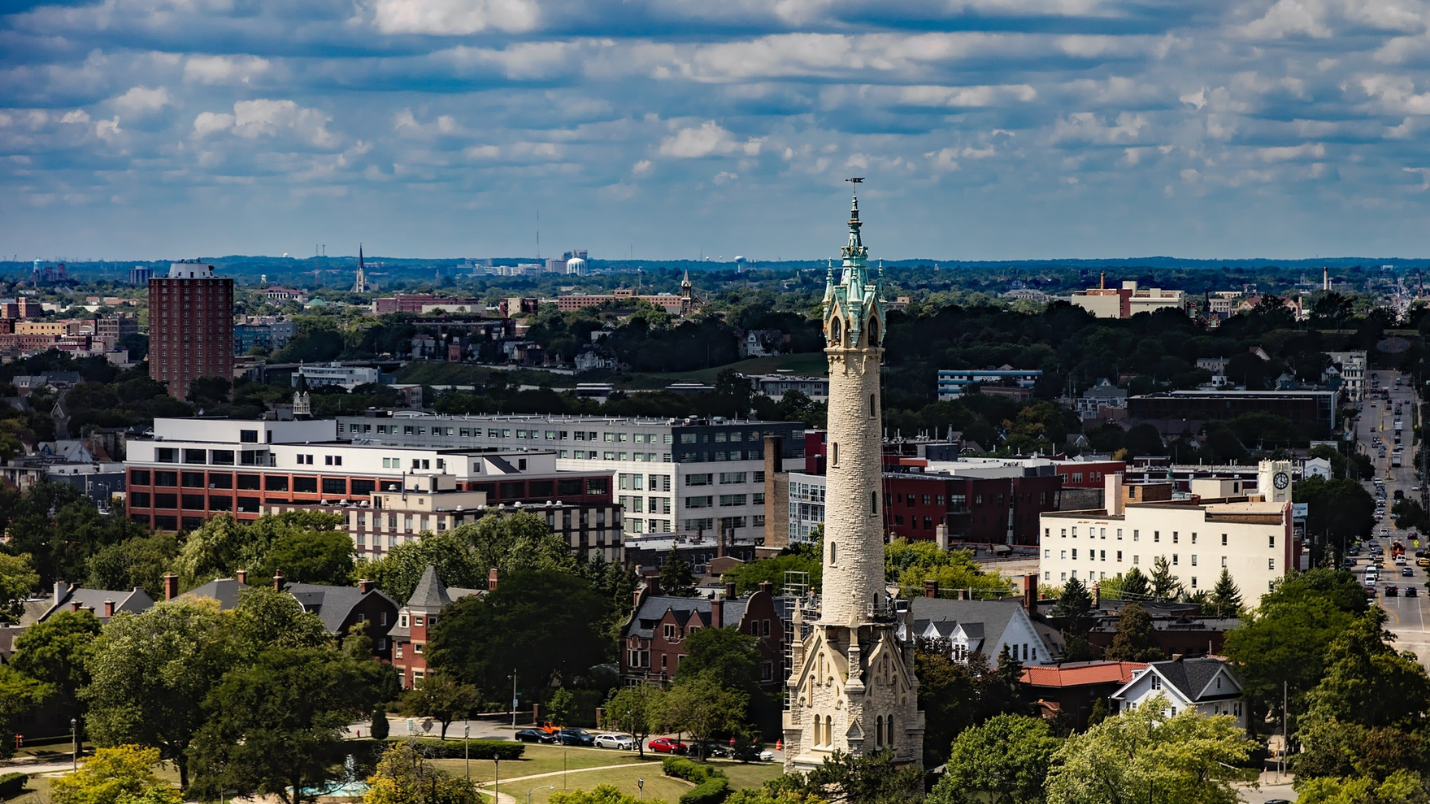 Masks on, arms open: Milwaukee nonprofits foster new connections in the heart of the pandemic

At a time when a pandemic isolated Americans, local nonprofits were building bridges in Milwaukee.

A proud city of immigrants, some who can count their roots in centuries rather than years, Milwaukee is also home to refugees and immigrants from around the world, including the largest concentration of Karen people from the former Burma.

When in-person events were canceled, Shaneé Jenkins, Vice President of Social Responsibility  of the YMCA of Metropolitan Milwaukee, scrambled to foster real connections in a virtual setting. With the support of a grant from Welcoming America, Jenkins organized a four-part Zoom meeting series with the Asian American Pacific Islander (AAPI) Coalition of Wisconsin.

The collaboration was part of the Y promoting ways to denounce xenophobia as the pandemic took hold in America and hate crimes against Asian Americans increased.

“Our intention to connect with the AAPI Coalition of Wisconsin was to not only demonstrate our commitment, but to provide a platform for awareness and education,” Jenkins said.

From September to December 2020, each Zoom meeting addressed different aspects of the challenges facing Asian Americans and Pacific Islanders, including:

Each event featured five or six panelists from around the country sharing their experience or life experience to address the issues.

“We see ourselves as conveners. We love to do things in partnership, and we felt really empowered to bridge communities,” Jenkins said. 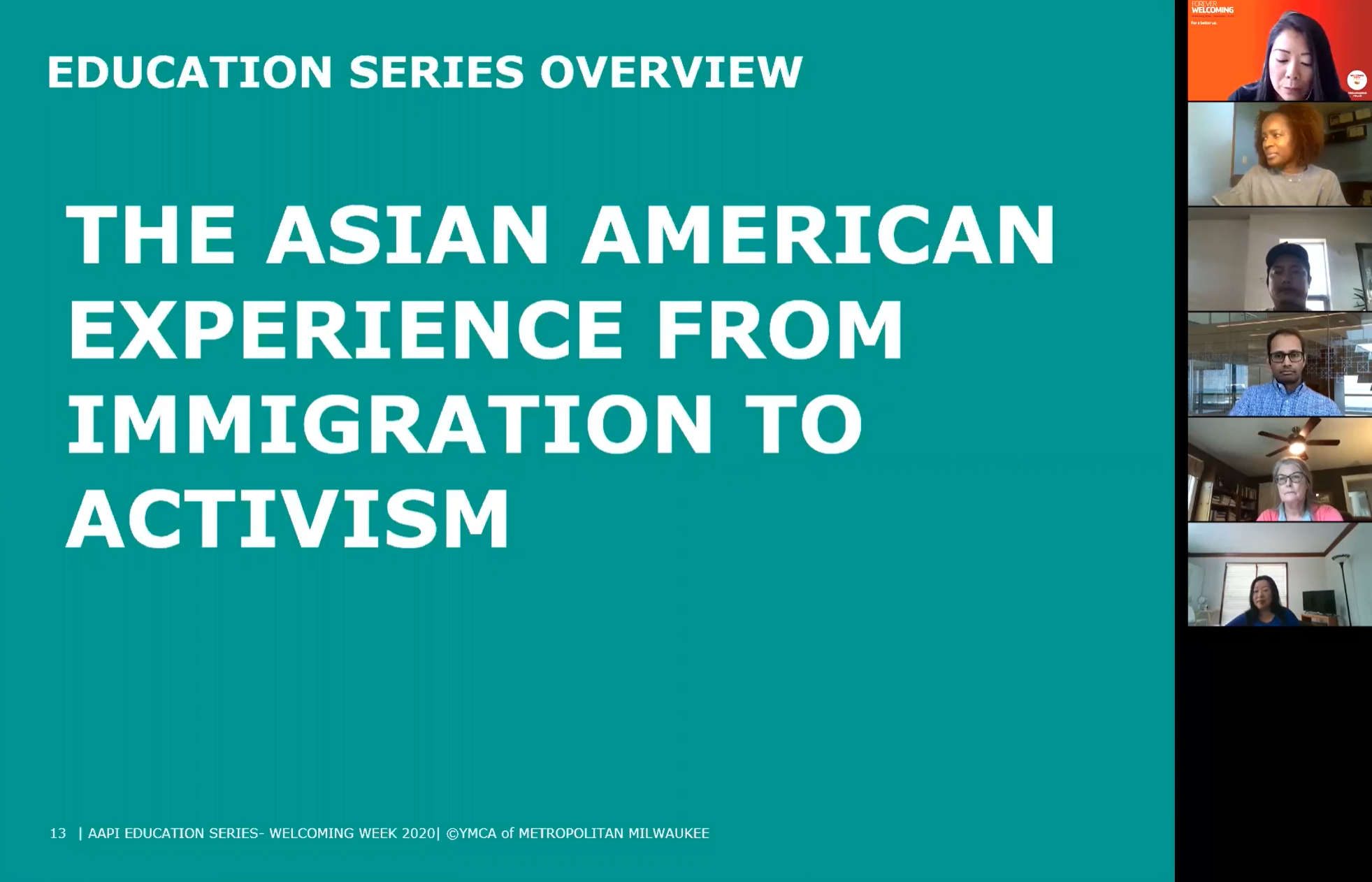 Zoom meeting from October 2020 hosted by the YMCA of Metropolitan Milwaukee with the AAPI Coalition of Wisconsin. Source: YMCA Milwaukee

A lifelong Milwaukee resident, Jenkins values the growing diversity of the city: “This is a community where I live, work, and play, so it’s been really great to see the Y collaborating,” she said. “I love leading with the fact that we are living in a changing community in terms of age, race, ethnicity, orientation, and gender.”

Smaller community partners were also empowered, including Neighborhood House, a nonprofit school for adult English-language learners. Most of its current students emigrated from the former Burma (now Myanmar), while others had come from the Democratic Republic of the Congo.

Neighborhood House used funds from Welcoming America to plaster huge posters of its students to the outside of the school building. 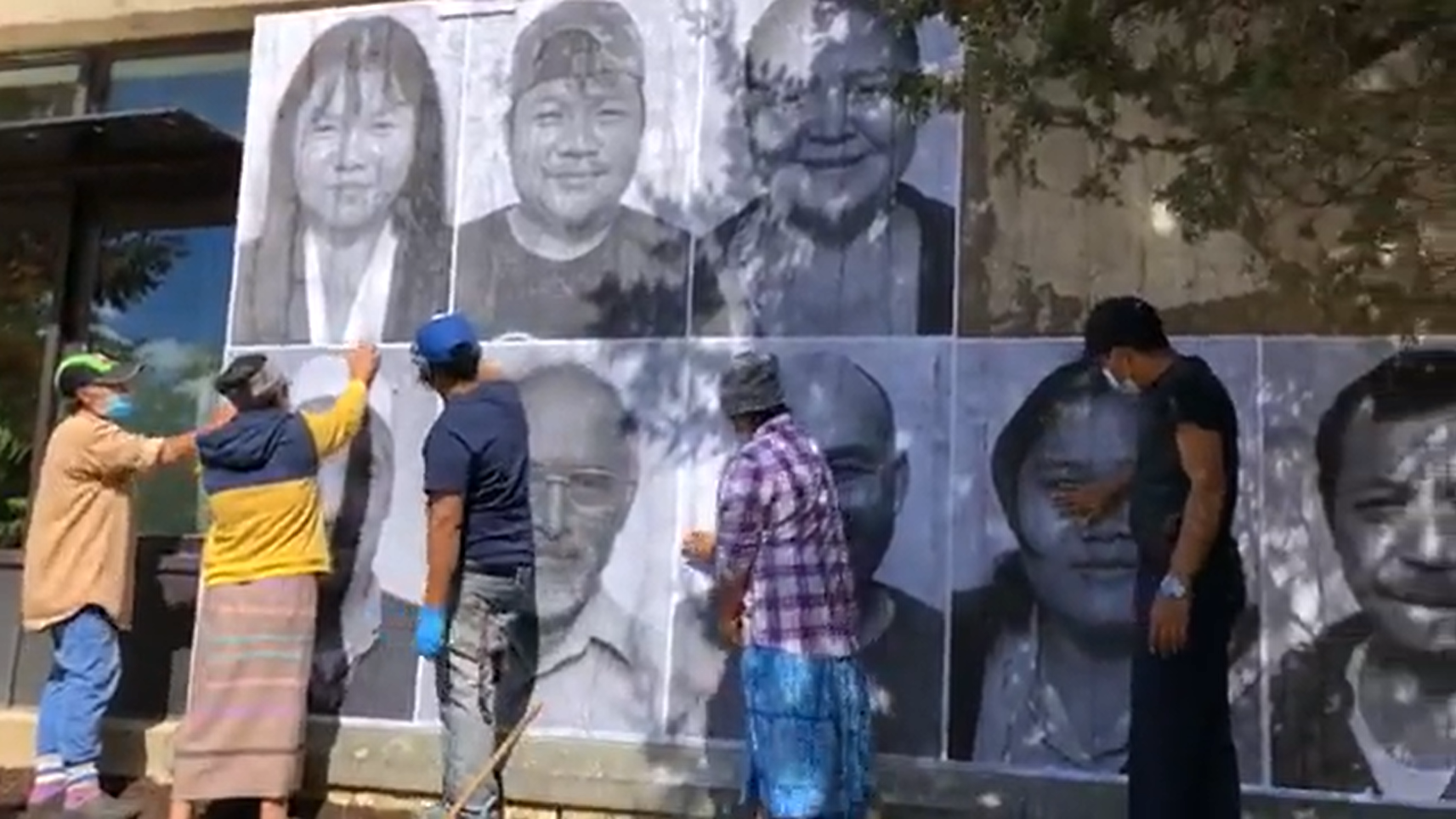 For new Americans who can often feel invisible in the community, it was a bold declaration of their presence.

“Watching them see themselves on the wall… that was one of the highlights of the year, frankly,” he said. “This has been an era when our human dignity has been challenged. And here were these portraits of dignity. It was really a sweet thing in the midst of all this isolation.”

Neighborhood House didn’t stop there. Taking all the necessary precautions against COVID-19, the school called students back from their virtual classes in September and added volunteers to get their hands dirty creating a new garden on the grounds of their school.

The school grounds were overgrown with invasive plant species. Refugees and long-time residents worked together to uproot them all and replace them with decorative flowers, shrubs and trees.

Cynthia Zarazúa, International Learning Program Manager at Neighborhood House, said this spring has brought a rush of blooms that give the school a new vibrancy.

“It was really heartwarming to see our students again and know that they were willing to come out and support our center and each other and the neighboring community,” she said. “And they were also thrilled to see the staff. It was even more special because of the added amount of effort to get them here and see them work during COVID-19. We were just very touched to be asked to be part of this program.”

Htee Paw, a former refugee who now works at Neighborhood House as an interpreter, said, “It was great. Our grounds look much better than they did before.”

“There was a lot of smiling and helping each other pulling the roots out, sharing the tools, planting together. There was more interaction than I’ve had for a while (because of the pandemic). We were outdoors, masked, distancing as well as we could in the pre-vaccine era,” he said.

About 25 refugees participated, most of whom are from the former Burma’s Karen ethnic minority. Karens have been displaced by the hundreds of thousands by decades of war.

Cebar admired the simple act of working together to beautify the grounds of the school the students attend. “It was inspiring to encounter people who have been through so much in their lives and still come through with some modicum of joy that eludes many of us who have had a far easier time of it,” he said.

At Goodwill Industries of Southeastern Wisconsin, laundry workers marked Welcoming Week with a party that celebrated the cultures from which they came, an event they called “Creating Home Together”, which was also the theme of Welcoming Week 2020.

The James O. Wright Center for Work & Training was decorated with flags and other fare from the workers’ country of origin, including a food feast. They created an interactive map to highlight the 12 countries represented among the immigrants. The experience built bridges to U.S.-born coworkers who were able to take a break from everyday responsibilities to learn more about their new American colleagues.

Antoinette Harris, a Goodwill Laundry & Linen employee, liked the food. “It was a good experience because we had a chance to experience different food from other cultures. It also gave us an opportunity to talk to the employees from other countries about their homeland and where they were from,” she said. “Some of our coworkers that are from other countries are quiet. They were very open and willing to discuss where they came from. I liked the map that was displayed at the Goodwill. Some of our coworker’s countries — I did not know where they were. It was an eye-opening experience.”

Another employee, Nyjel Farrington, said, “I liked the different music that was being played. I liked that I was able to try different food and different ‘tastes.’ I think the season was different and unique.” 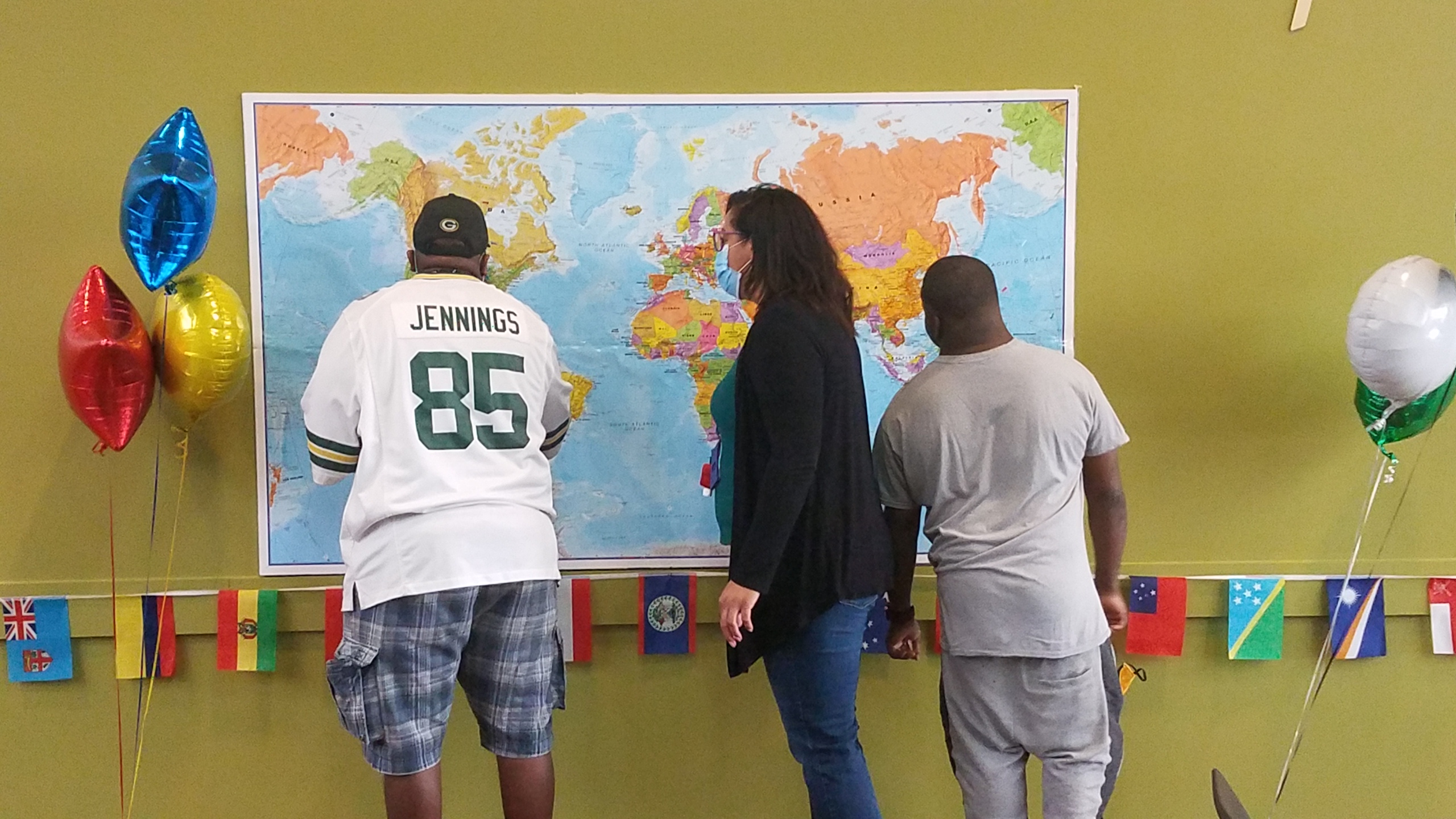 “It was the first time [the refugees] were able to tell their stories. They felt a true sense of belonging and for the first time in years, their countries were being celebrated,” Jenkins said.

She was grateful that Welcoming America helped amplify the work that the YMCA and other local partners were doing supporting immigrants and building bridges with long-time Milwaukee residents. She considers the work of connecting diverse residents essential to the city’s future.

“We need to be committed to this work regardless of whether the fiscal resources are at the table. Because the resources will be there,” Jenkins said. “The responses to our efforts were tremendous because we were able to lead with intention.”