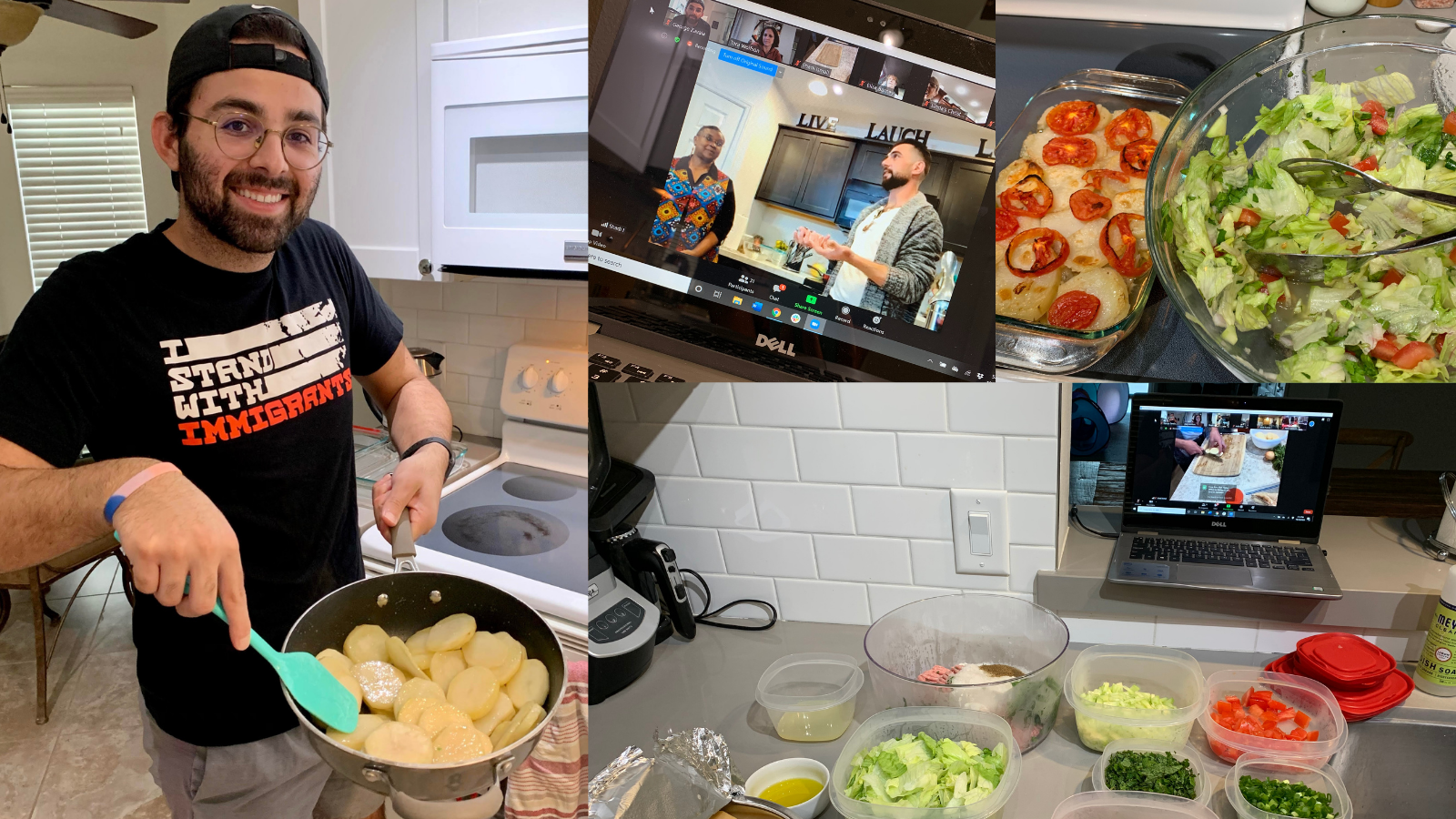 From Syria to Idaho to California: Reflections from a virtual cooking class

Since September, the Idaho Office for Refugees, a Welcoming Network member, has offered cross-culinary kits and virtual cooking classes as part of a six-month series led by Boise residents with refugee and immigrant backgrounds.

I was lucky enough to attend a class taught by Shadi Ismail, a Syrian refugee who calls Boise home. He was going to teach us his family recipe for kefta and Arabic salad. Prior to the class, I received a list of ingredients to purchase and prepare. I live in California, but if I had lived in Boise, I would have received a recipe kit with all of the ingredients, including dry items from local ethnic stores and produce from refugee farmers in the area.

Believe it or not, Boise is one of the fastest growing cities in the country. With a booming economy, picturesque metropolitan area, and affordable living costs, the city has a reputation for being welcoming. In 2018, the Office of the Mayor, with support from community partners and Welcoming America, helped the city become Certified Welcoming.

Another key supporting partner of the city’s welcoming achievements was the Idaho Office for Refugees at Jannus, Inc. (IOR). As a private sector initiative, IOR is tasked with statewide assistance and services for refugees, including case management, English language training, and community events and programming.

Through the virtual cooking class, Shadi and the IOR staff facilitated a special night that reminded me that, even in social distancing times, there are experiences to make you feel connected and immersed in a community. Before the class started, I prepped my ingredients, propped up my laptop on the counter, and signed into Zoom. During the next two hours, Shadi shared stories of his life in Syria, recipes and dishes he loves most, and his life in Boise since arriving in 2012.

Shadi explained the ingredients, how to proceed step by step, and took time to answer questions shared in the chat box (“when should we flip the potatoes?”, “how much salt did he say to add?”). Most of us had never heard of kefta, which is made of ground meat (usually beef or lamb) and an assortment of spices. Participants used a variety of meats, including Beyond meat, turkey, or chicken instead. The seasoned meats were then layered with potatoes and sliced tomatoes before being baked in water and oil.

Throughout the evening, more than 30 participants were encouraged to showcase their progress as Shadi walked through the recipe, creating a supportive learning environment. I loved the kefta, mostly because of the spices. They were common ingredients that transported me to the Middle East. It signaled to me how “foreign” recipes aren’t very foreign at all.

At the end of the class, we shared our final products. Many of the participants were surprised at how well their dishes turned out. Even from 800 miles away, I felt as though I was in a large kitchen with everyone, learning about Syrian culture while making Shadi’s family recipe.

When asked about his experience teaching this program, Shadi said, “My family love was just shared with 73 homes through food.” The virtual cooking class demonstrated how common ingredients can remove the sense of “other” and pave a pathway for shared learning and joy (I mean, who doesn’t love a potato-based dish?)

George Zavala is the Western Regional Manager at Welcoming America.