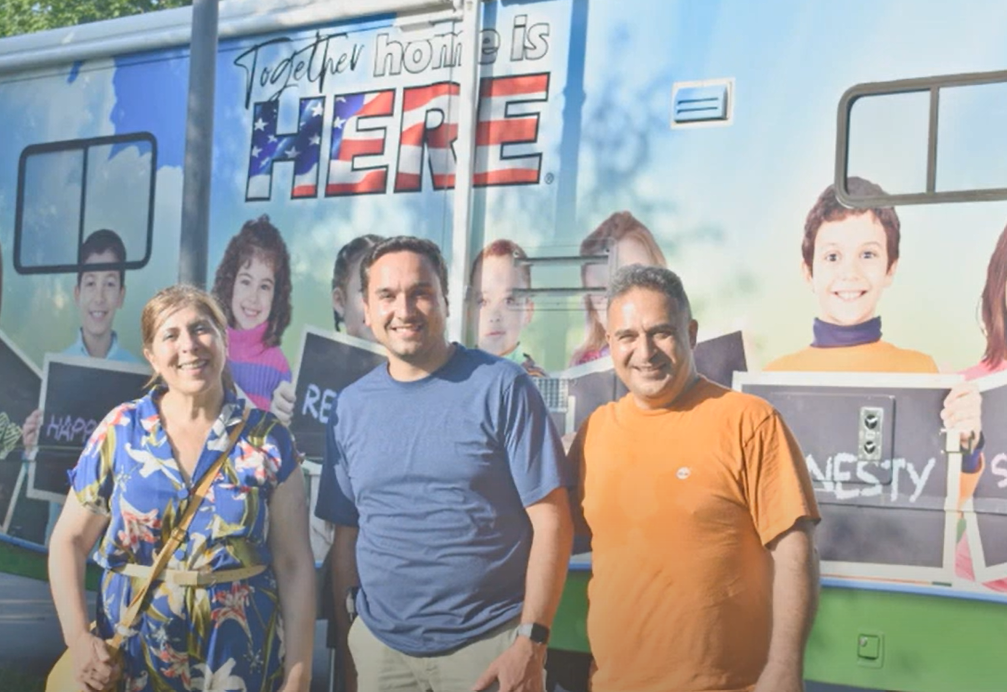 Creating a new home, deeper belonging together in Maine

Zoe Sahloul was seven years old when war erupted in her native Lebanon. For the next 20 years, she endured the deprivations, chaos, and uncertainty of civil war.

“They train you in a lot of the country where it’s a war zone to learn how to survive. But I decided I’m not going to learn only to survive. I’m going to find the strength to really live,” she said.

At 27, Sahloul and her husband escaped to Canada. Within a few years, she made her way to the United States to Portland, Maine and began, finally, to really live.

“Maine reminded me of home because of the ocean. I really collected myself here,” she said. “Home became Maine. This is what I try to help out our new neighbors, to find the strength and support to call this place home.”

Sahloul is now executive director of New England Arab American Organization, which serves 500 families in and around Portland.

Welcoming America’s Belonging Begins With Us campaign helped NEAAO create new ties and deepen existing ones between immigrants and established Mainers, despite the pandemic.

In July, NEAAO hosted a family picnic at Westbrook Community Center to give neighbors from diverse backgrounds a chance to laugh and play together.

“It was just wonderful for me to see some of my friends who I’ve only seen on Zoom conferences,” said Pat Bartke, who leads a conversation class for English language learners.

More than 80 people participated, including many Arab Americans and longer-term white residents, a safe space for women in hijab and neighbors who are unfamiliar with Muslim practices to interact. Immigrants from Somalia, Iraq, Syria, Jordan, and the State of Palestine were represented.

“This opening is what you’re hoping for new Mainers, and the host community to come together, play together, ask questions, talk to a woman in hijab,” Sahloul said. “Your neighbor can be a sister or grandmother or friend or mother or a young woman starting her life here.”

Westbrook donated the cost of renting the facility to help make it happen. Mayor Michael T. Foley attended and praised the event: “It is great for our community to have an organization like NEAAO which is able to organize events like this to bring the diversity of our community together for everyone to attend! Their recent Together Home is Here Event underscores the importance and success of these types of events in the city, and we look forward to more in the future.”

“Your neighbor can be a sister or grandmother or friend or mother or a young woman starting her life here.”

With the help of Welcoming America, NEAAO also collaborated with Maine museums on two virtual events where participants shared objects or stories that reminded them of their former homes. In March, 23 people participated in “Gifts of Acadia” in partnership with the Bowdoin College Art Museum.

One participant, Deborah, shared a handful of books that her father gave her. Her parents were Jewish immigrants from Russia, where they could not get an education. When they moved to Brooklyn, New York, her father regularly visited the library and bought hundreds of classic books to educate himself. Another participant, Alison, shared a bottle of Chanel No. 19 perfume. The scent reminds her of home because her grandmother used to wear it.

In April, NEAAO partnered with The Maine Art Museum Trail (and its many museums) on a program about home and belonging. Sahloul shared a memory of her home in Lebanon, and curators shared individual works that represent ideas of home and belonging in a webinar administered by Bates College Art Museum.

Support from the Belonging Begins With Us campaign also provided an ongoing way to build bridges in Maine through the creation of the Together Here is Home RV. The vehicle is decorated with illustrations of diverse and smiling faces, and is used primarily for outreach in the Greater Portland area and beyond.

“This is the hope for us: to take the RV and go to rural areas, listen to their stories, and to show them, you know what? We care,” she said.

Such conversations can break through fear and stereotypes, she said, “to look and say this person’s story applies to me. I did not know a woman in the hijab is not a terrorist. That she’s a mother, celebrating her child’s graduation.”

Sahloul said the plan is to gradually build trust in rural communities that may be reticent to embrace the outreach, first with handing out school supplies to children in need, and planning future visits featuring concerts and more interactive events.

The RV is working double duty as a pop-up vaccination clinic, too. One recent outing involved going to a job site where many immigrants work early in the day. A nurse administered 53 doses that morning. At other outings, the RV served as a private place for women in hijab to receive the vaccine.

“During COVID, it’s really beautiful how all of us came together to serve the needs of the community, whether they’re new Mainers or not. We’re all coming together,” she said.

Bartke, who has lived in Westbrook since 1997, said the growth of the Arab American community has brought new vitality to her town.

“I think they’re making Westbrook a more accepting place and a friendlier place. As time goes by, more [new Americans] will be working and starting their own businesses,” she said. “We have two Arabic markets and a restaurant, and I think there will be more and more places and opportunities where we can interact.

Bartke continues to teach conversational English and looks forward to the sessions.

“These women are just so precious, so wonderful. I just love being with them. It’s kind of the light of my life,” she said. “They’ve done more for me than I’ve done for them.”