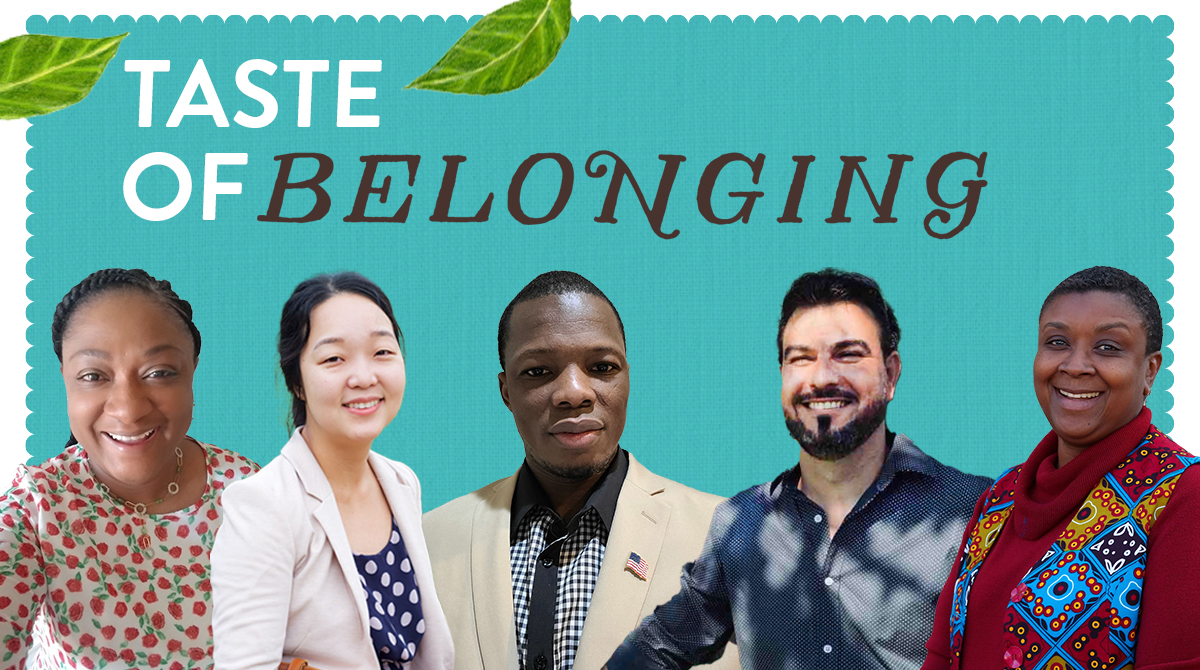 This month, we’re celebrating #ImmigrantHeritageMonth through the stories of food, history, and belonging from our Taste Of Belonging cookbook featuring members from the Welcoming Network.

Through the month of June, we will celebrate immigrants by highlighting five stories and recipes from the cookbook. 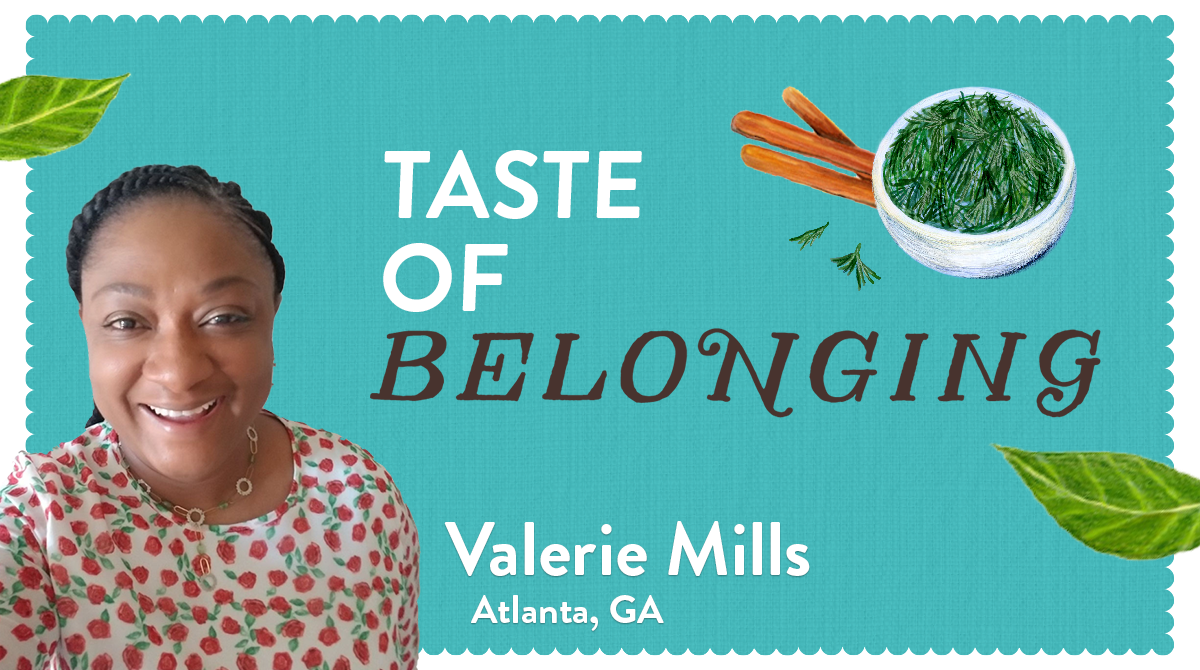 Valerie Mills is senior program manager at Atlanta’s Office of Immigrant Affairs (Welcoming Atlanta) and immigrated to the U.S from Ghana.

Valerie shares her recipe for Palaver Sauce or Nkontomire, a Ghanaian delicacy from West Africa. It is traditionally prepared with the leaves of the cocoyam plant. Palaver colloquially means “troublesome” and it was said (in Valerie’s family, at least) that you could not eat it without getting the sauce on your clothes and making a mess!

Usually, when the sauce is done, they add a hard-boiled egg to whatever starch accompaniment they are eating it with. For this recipe, Valerie uses a mix of spinach, turnip greens, and collard greens because she hasn’t found fresh cocoyam leaves in the U.S. yet!

For Valerie, this recipe reminds her of joy, contentment, sunshine, and family.

1 pound protein of choice cut up in medium size cubes. (Lamb is traditional but smoked fish, especially mackerel, is delicious. For vegetarians, substitute mushrooms of choice.)

Salt and black pepper to taste

* Skip if you don’t have a stomach for aromatic spices

** You may use any oil of choice. It is traditionally made with palm oil.

Get the rest of Valerie's recipe and others, plus stories of immigrant heritage by diving deeper into the cookbook here. 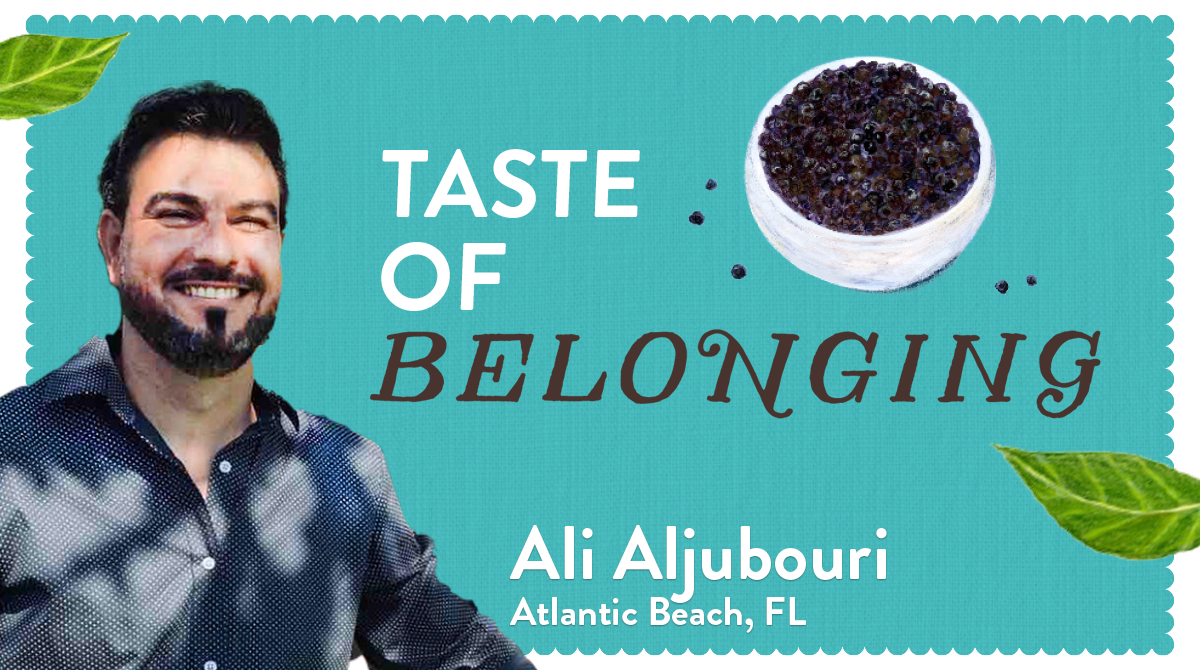 Ali Aljubouri immigrated to the U.S. from Baghdad, Iraq. He works at a local school in Atlantic Beach, FL as the cafeteria director and soccer coach.  Ali’s recipe is a traditional breakfast staple from Iraq - Bagila Bil Dahin (fried eggs over fava beans).

Ali says: “Growing up in Iraq, I used to wake up every weekend to the smell of my mom cooking a special breakfast. Now, cooking with my family reminds me of my home country. We try to cook together on the weekends as it helps us share the culture, tastes, and music of home with our daughters. This recipe is a simple dish but it gathers our big family together. When I feel homesick, I introduce my daughters to my home culture via food, and they help me from A to Z while we listen to Iraqi music. Through this dish, a lot of tears mixed with laughter have come along.”

1. Soak the fava beans in water overnight then drain.

2. In a pot, bring the beans to a boil with a dash of salt and lemon juice. Boil until softened (about 20 minutes), then remove the beans from the water, and set aside. Keep the water boiling over low heat. It is essential for the next step.

3. To prepare the bread, place the bread cubes in the boiling bean water and remove immediately (just dip once and remove), then place on your platter.

4. Pour the fava beans over the bread.

5. Heat the vegetable oil in a large skillet over low heat, add the onions and fry until caramelized.

6. Beat the eggs and pour on top of the onions without stirring.

7. Once the eggs have cooked through, place the fried eggs over the beans and pour any extra oil over the whole platter. 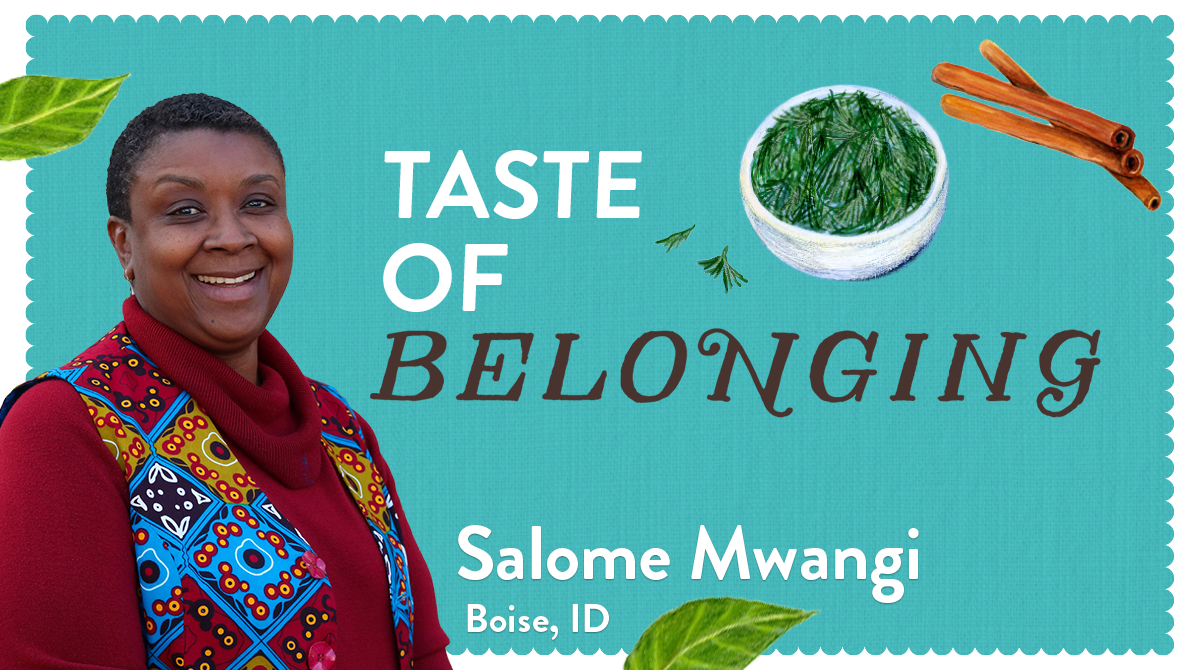 Salome Mwangi came to the U.S. from Nairobi, Kenya via the refugee resettlement program. She loves sharing her culture through Kenyan cuisine and is an advocate for refugees in Idaho. Salome works as the Refugee Speakers Bureau Social Integration Coordinator at the Idaho Office for Refugees, a Welcoming Network member.

Salome’s recipe is a traditional Kenyan recipe. Irio, or Mukimo, is passed down from one generation to the next. Irio means food in Gikuyu, the language of the Gikuyu people of central Kenya. Since they were predominantly farmers, this was a quick and easy way to make a meal. This dish can be made using beans instead of peas, and maize instead of corn. In the past, people would leave the maize and beans boiling in a pot for the greater part of the day before adding potatoes. Sometimes, pumpkin leaves were added to the pot. They would then mash it and it would be eaten as a complete meal. This was a meal enjoyed on most occasions.

Salome says: “I remember my grandmother’s sister, who lived a long way away from my grandma. When she came to visit her sister, she would make this dish and pack it using banana leaves, and then place it in her purse. After they had greeted each other and shared the updates of their lives, they would sit down on a grassy slope, facing Mount Kenya, and slowly enjoy the meal together. They did not need utensils to enjoy it. Since I am named after my grandmother, I was included in their circle of love as they enjoyed the dish and each other’s company. I felt cherished, spoiled, blessed, and honored — all at the same time!”

1. Boil the potatoes, peas, and corn together until they are cooked through.

2. Drain the water, then mash the potatoes, peas, and corn together.

3. Mash the mixture until the peas are well integrated into the potatoes.

6. Heat 2 tablespoons of coconut oil (or your choice of cooking oil) in a pan.

7. Once the oil is hot, add the chopped onion, and keep stirring to keep it from burning while caramelizing.

8. When the onions achieve a deep brown color, add them to the mashed peas, corn, and potatoes.

9. Mix thoroughly. Serve with beef or chicken, or keep it vegetarian. 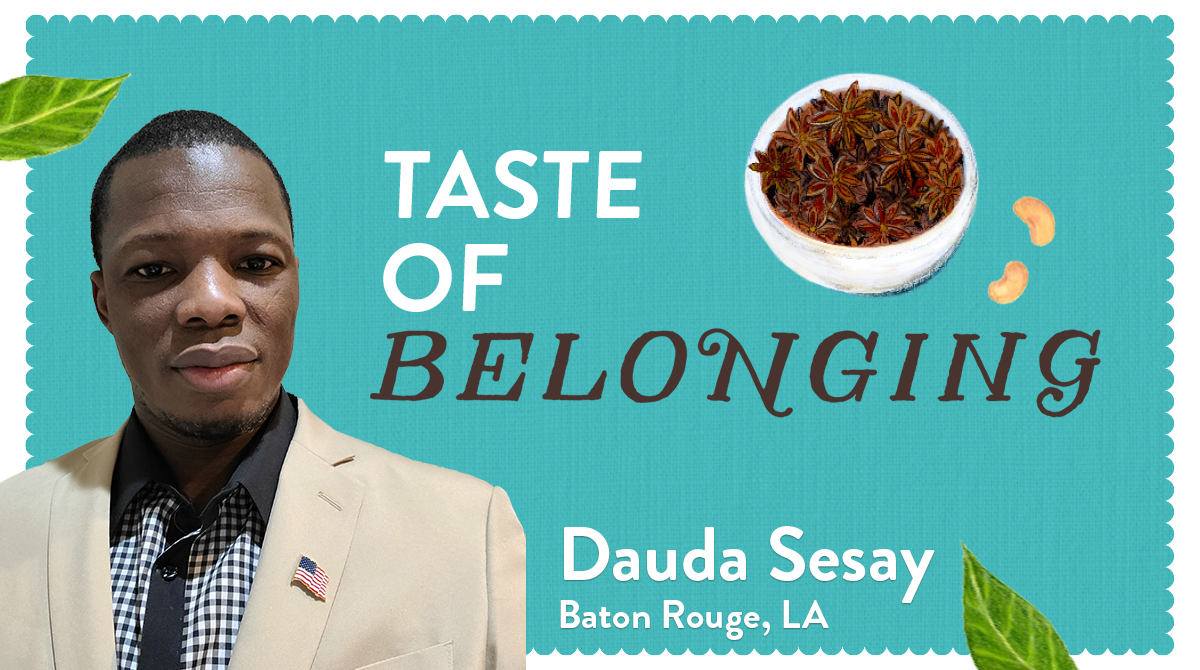 Dauda Sesay immigrated to the US after fleeing his war torn country of Sierra Leone at the age of 16. Dauda is the Vice-Chair of the Refugee Congress Board of Directors and an Honorary Delegate.

Cassava is one of Africa’s most versatile foods and is widely consumed in North, East, South, and Western Africa. Its root can be pounded to make fufu (a soft and doughy staple made from boiled cassava) or eaten raw, boiled, or baked. The leaves of cassava roots are an essential ingredient in cassava leaf sauce and stew.

According to Dauda: “Cassava leaf stew is best described as a favorite staple food for Sierra Leoneans. It is such an essential contribution to the diet of my home country and the culture. Every Sierra Leonean, at home and abroad, rich or poor, eats cassava leaf sauce almost every day.”

Get the rest of Dauda's recipe and others, plus stories of immigrant heritage by diving deeper into the cookbook here. 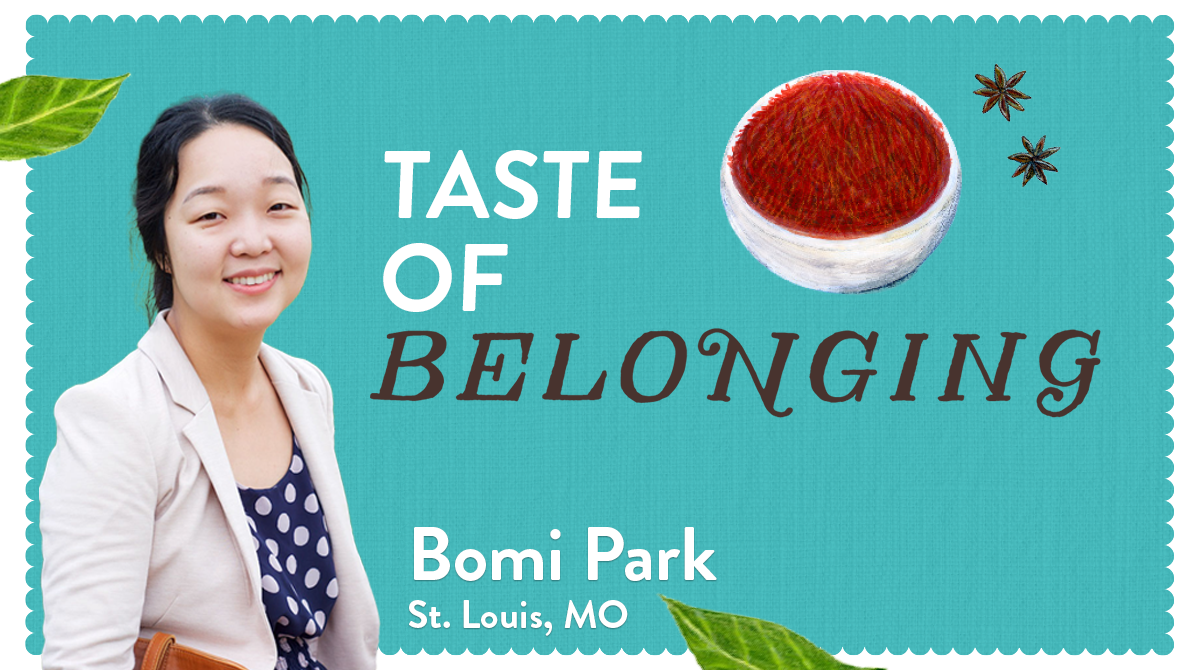 Born in Chungju, South Korea, Bomi Park first came to the U.S. in 2008 while in high school through a foreign exchange program. She now lives in St. Louis, MO and is a Program Manager at the St. Louis Mosaic Project, a nonprofit organization in the Welcoming Network.

Bomi’s recipe in Taste of Belonging is a Korean dish. Traditionally, bulgogi is made with beef marinated in a soy sauce-based dressing, though there are versions of bulgogi that can be made with different proteins such as pork or tofu. Sometimes, it’s made with additional sauce (gochujang) for a spicy taste.

It’s a common dish in South Korea and typically present at celebrations and gatherings. Some Koreans might even say its familiar salty/sweetness is a comfort food.

As Bomi reflects, “Bulgogi is everyone’s favorite or go-to Korean dish. It’s such a good dish to introduce to anyone who’s trying Korean food for the first time. I have many fond memories of eating bulgogi with my friends and family back home in Korea.”

1 pound thinly sliced beef (or your choice of protein)

Optional: your favorite veggies/mushroom or noodles

2. Pour the marinade into a bowl and combine with the protein (if you are using tofu: pan-fry the tofu first until it’s crispy on the outside, then marinate).

4. Stir fry with vegetable oil. Cook ingredients in the order of hard to soft (carrots > onions > protein). Cook the veggies with just a pinch of salt before adding the marinaded protein.

5. Turn the heat off when carrots are cooked. Put the green parts of green onion in the pan to cook with the remaining heat.

6. Plate the bulgogi with cooked rice and enjoy!

Tip: The water that you used to rinse the rice can be used to adjust the saltiness or liquidity of the bulgogi. If you want to add noodles to your bulgogi, adding rice rinse water is a good way to help them get incorporated.